What is a coffee and tea set made of. 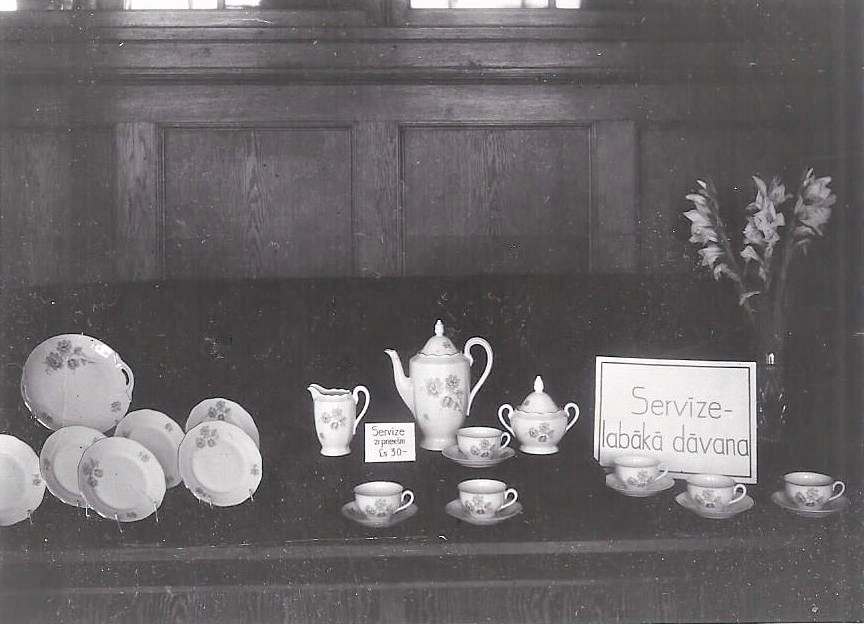 “A/S M.S. Kuzņecovs” and “J. Jesena porcelāna fabrika”  traditions implied that a coffee set for 6 people consisted of a coffee pot, sugar tray, cream pot, 6 cups, cup saucers and dessert dishes. The large serving dish – a cake dish – could have been in the set or purchased separately. Even after 1940, both factories continued to make these coffee sets, except the cake plate lost its place in them. At the same time, tea sets started to be made, with a teapot in place of the coffee pot, and a biscuit bowl instead of a dessert dish. Since then, the sets have remained virtually unchanged:

Popular pre-war shapes, such as, “Rubenss”, “Tauta” and “Maija” were made in both – coffee and tea sets, while “Ping-pong” was just in the coffee sets.

Zina Ulste in 1954 introduced a new turnaround in set style, creating two separate sets, which were united with the name “Laima” – tea set “Laima” and coffee set “Laima”. By maintaining a joint style and using same decorative techniques, different shapes were created for each of them: for the tea set, all the central objects were made more rounded, and also the size of cups un cup sauces differed. 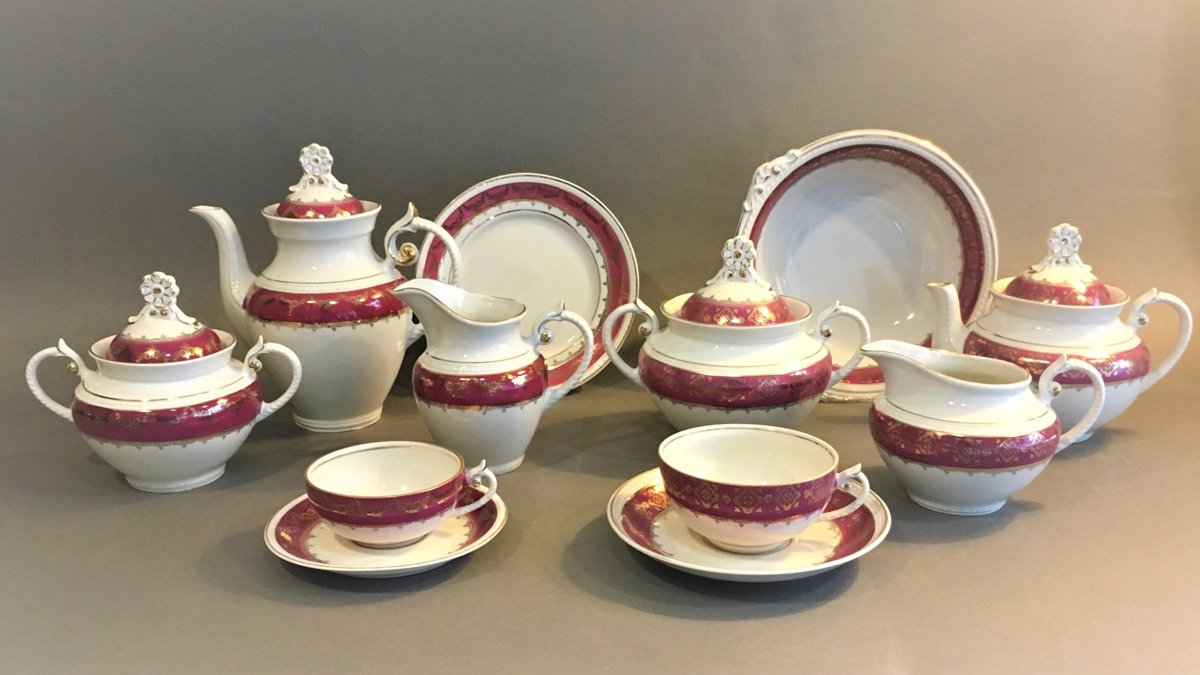 In the upcoming years, the sets in Riga were mainly produced either as coffee sets – “Alfa”, “Daina”, “Ausma”, “Stella”, “Saulīte”, or as tea sets – “Bitīte”, “Sakta”, “Marijka”, “Jūrmala”. The difference for the use of them was indicated, firstly, by the various sizes of pots and cups, as well as if the set had a biscuit bowl or a dessert dish. The exception was the set “Augstā”, which had both a coffee pot and a teapot. For the convenience of production, several tea sets – “Jūrmala”, “Marijka”, later also “Viola” – had the same biscuit bowls, later also cup saucers. 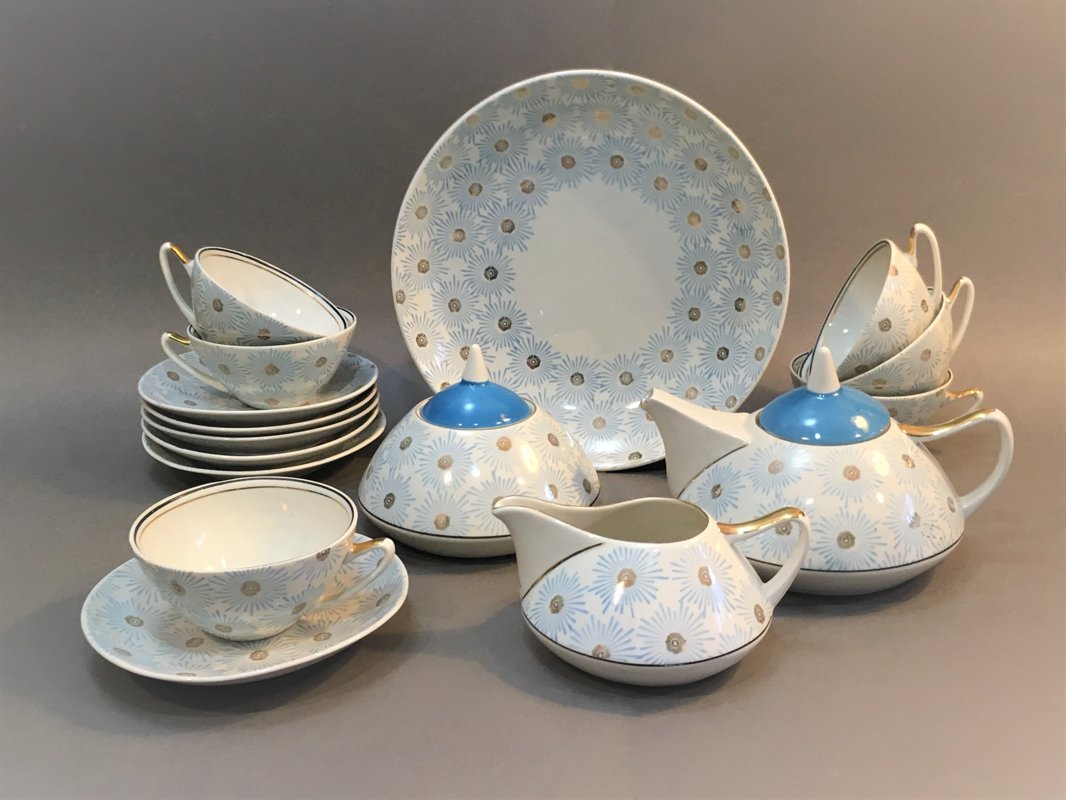 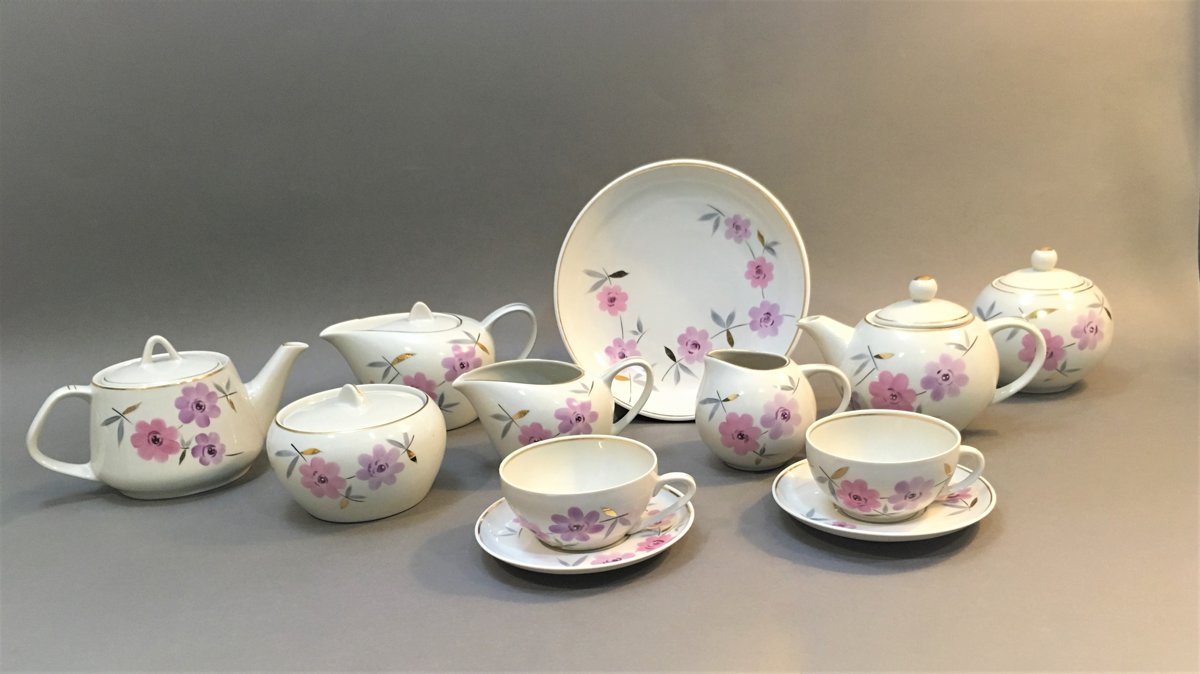 With “Viola” and even “Regīna” and “Rīga” later on, universal sets were returned in the second half of the 60s. This meant that both coffee and tea sets had the same cup size. This tradition was continued by popular set “Karīna”  in the following years.

Since 1969, thin - walled porcelain production had been mastered, and coffee sets “Vita”, “Marianna” and “Nelda” had been taken up as mocha coffee sets, while thin-walled “Sigulda” and “Diāna” were the favourites of universal sets until the factory stopped working.

A special feature, like a large coffee pot, should be mentioned separately – if the set was made for 12 people, the standart pot would be too small. For the coffee sets, such as, “Daina”, “Stella”, “Saulīte”, “Vasara”, “Aija-1”, “Aija-2” and “Māra”, a large coffee pot option was made. It was essentially a bigger model of a standart pot. 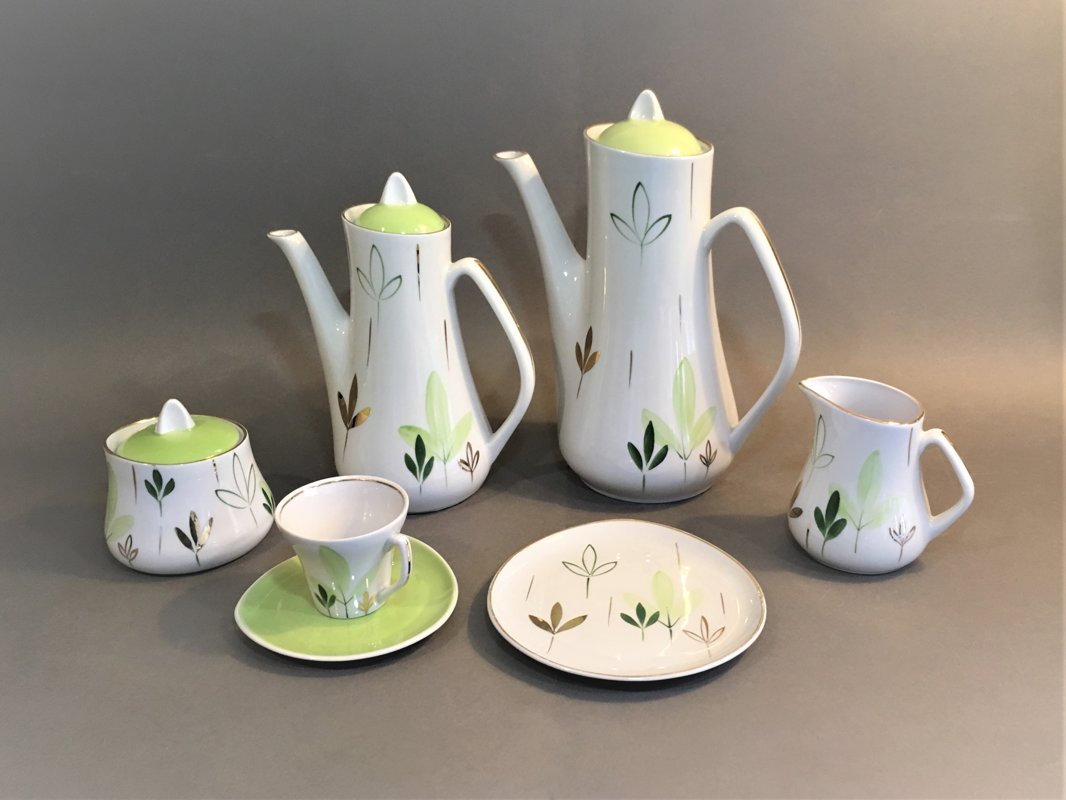 Another characteristic of Riga coffee and tea sets was the fact, that they didn’t have a butter dish or a big sandwich plate. Nor did they have a vase for flowers (except “Vakars” set).

Just like for coffee sets, traditions for dinner sets were established in Jessen’s and Kuznetsov’s factories. The same shapes were still used after 1940, which initially met the demand for dinner dishes. 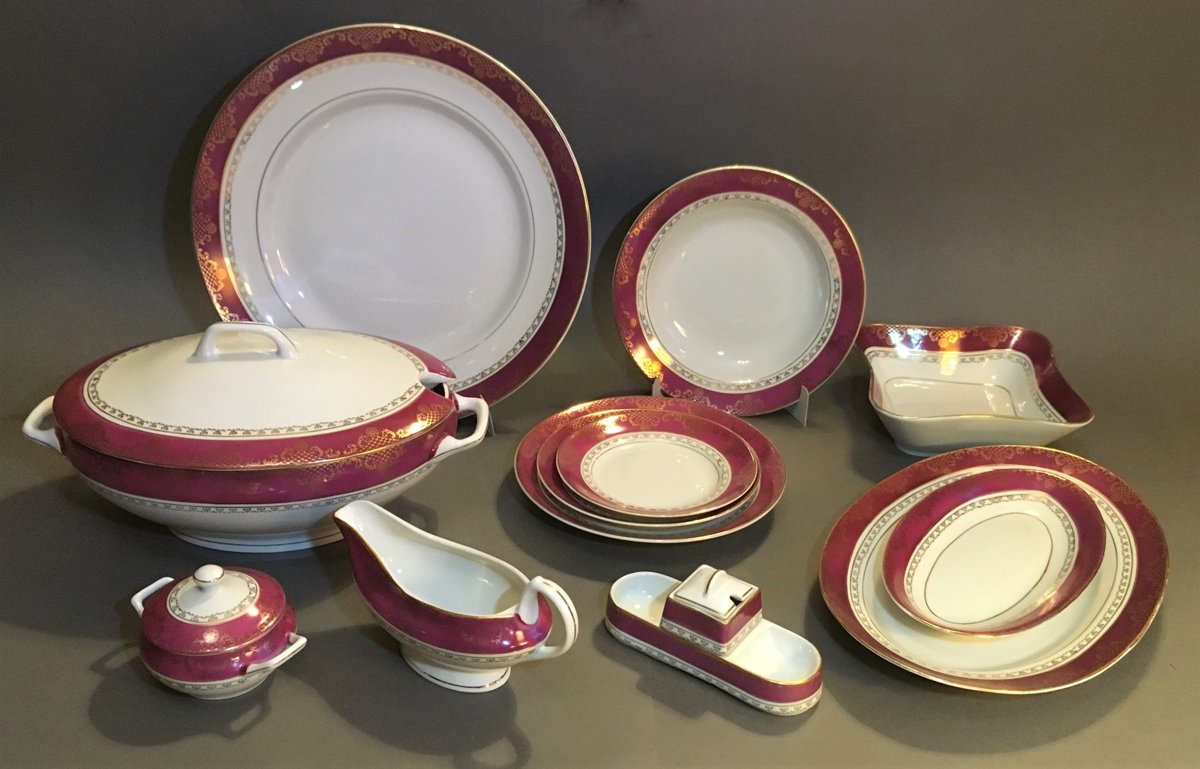 The traditional dinner set for 6 people consisted of: 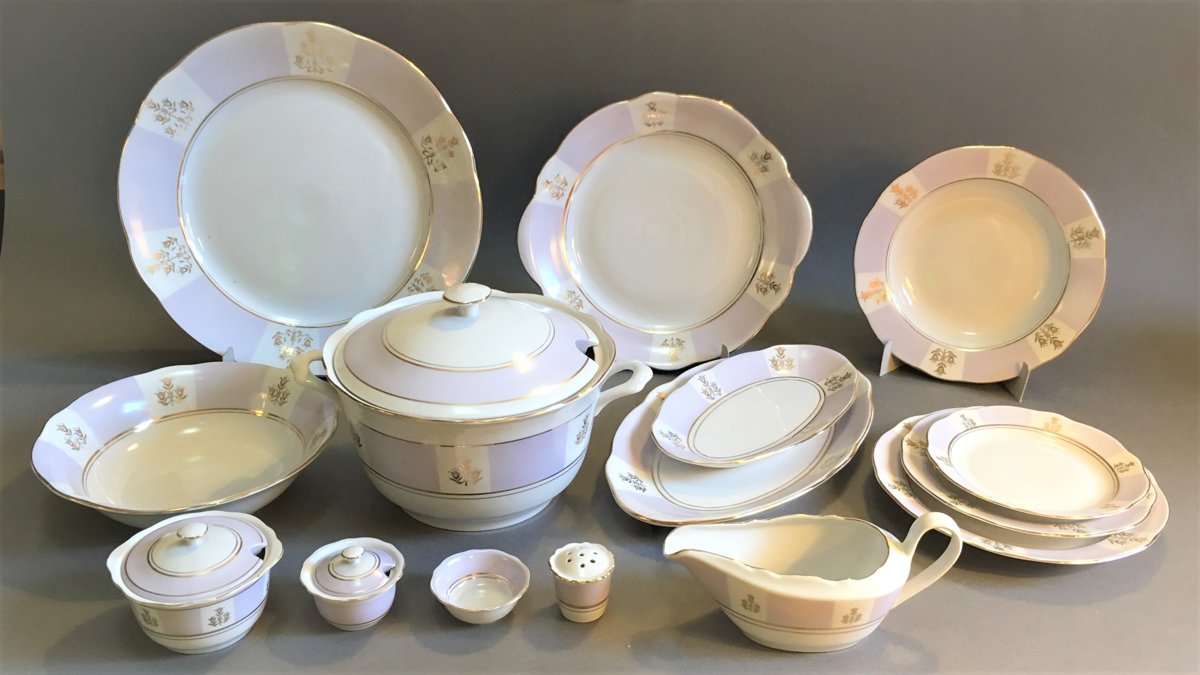 The first original- shape dinner sets  “Vārpa” and “Spīdola” didn’t make any significant changes, as well as the following set “Oktobris” and the faience sets “Diāna” and “Augstā”. Only spice dishes were never combined together.

New changes came along with the dinner set “Aija-2”, which started the so - called “dish ensemble”. These dinner sets matched with coffee and tea sets. “Aija – 2” was followed by “Aija-1”, “Māra”, “Ārija” and “Viktorija”. Even though the purchaser was able to buy matching dishes for the whole house, if they wanted to (and were lucky), the basic dinner set remained the same as it did for the past fifty years.

*page is still being made and expanded